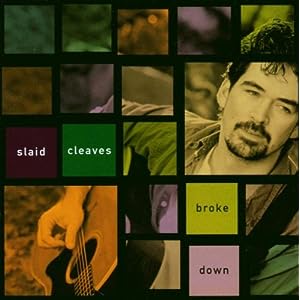 Slaid Cleaves is an Austin based by way of Washington DC and Maine singer/songwriter who released one of the best records of the past twenty years.  That record is Broke Down.  Released in 2000 on the heels of Cleaves’ debut No Angel Knows and at the height of the Pat and Cory phenomenon, Broke Down managed to find a large audience and great critical acclaim.  The album and Slaid were universally embraced and accepted into the Americana hierarchy and with good reason.  The collection of tunes produced by Gurf Morlix was a revelation.  The songs were full of classic romantic tragedy, but audiences responded with  (at that time) the type passion and fervor solely reserved for a Pat Green Billy Bob’s show.  Despite the downtrodden and depressing nature of much of lyrical content, the record was still popular due to its emotional heft and power.

Cleaves managed to be a folksinger who was seen as hip, yet still maintain his Americana street cred.

Perhaps the most well-known track off this album among most Texas Music aficionados is “Horseshoe Lounge”.  An ode to the famed watering hole in Austin, Cleaves spins the yarn of a man who spends his nights down at the ‘Shoe peeling labels off his Miller Lites and pondering where his relationships failed.

The title track is a heart-wrenching tale of love gone wrong between Sherry and Billy.  This is thinking man’s Gary Stewart with lines like:

Sherry had a pawn shop band of gold,
A sink full of dishes and a love grown cold,
Along came a boy, pretty as the devil,
She took his hand, the whole thing unraveled,
There’s no turnin’ round, it’s broke down

Continuing the theme of the downtrodden and hopeless, Cleaves has the protagonist of “One Good Year” begging for a positive 365 days after so many days of failures.  The most upbeat song on the album is “Bring It On” as Cleaves introduces us to a character that has finally had enough and despite life continually raining down around him, he challenges life and Mother Nature to bring on more because he’s now confident he can handle it.

“This Morning I Am Born Again” is a song where Cleaves takes lyrics from Woody Guthrie and along with Morlix pairs the words with the type of rootsy, groove-laden production that is now en vogue with artists such as Jason Eady, The Trishas and Kevin Welch.

Other standout tracks are “Lydia”, “Breakfast in Hell” and Del McCoury cover of “I Feel the Blues Moving In”, but really there are no throwaway tracks and each one contributes to the overall theme and identity of the album.

Cleaves and Broke Down arrived at a time when Texas Music was experiencing one of its growth spurts and managed to remind everyone that lyrics are just as important as having a good time.  The earthy and rich production touches Morlix provided became a signature sound that many other Americana and Texas artists would attempt to recreate in the ensuing decade.

This isn’t music for everyone with the Irish folk elements and stark themes, but Cleaves thoughtful songwriting and ability to tell a story make him a strong link in the long line of great Texas songwriters (despite originally being from Maine/DC)…falling somewhere on the chronological timeline between Keen and Bingham.  Slaid Cleaves  is still out there touring and releasing great music, but his 2000 output remains a landmark.  For these reasons and more Slaid is a Texas Treasure.

Purchase Broke Down from LoneStarMusic.com

Check out “Horseshoe Lounge” on The Drop

16 thoughts on “Slaid Cleaves-Broke Down”